Hotels Gas Stations Restaurants Camping
Less than three hours from Seattle, an alpine landscape beckons. Discover communities of life adapted to moisture in the west and recurring fire in the east. Explore jagged peaks crowned by more than 300 glaciers. Listen to cascading waters in forested valleys. Witness a landscape sensitive to the Earth's changing climate. Help steward the ecological heart of the Cascades.

A 21 year old woman was found Monday after being reported missing on Saturday evening from Hidden Meadows Camp on the east side of North Cascades National Park, approximately 9 miles from State Route 20. She was found uninjured about Â½ mile from camp.

Cascade River Road will close to all traffic at milepost 18, five miles before the trailhead, Monday, October 7-18. Cascade River Road sustained a considerable amount of damage following storms, heavy rains and flooding around the 2017 Thanksgiving holiday.

State, non-profit and federal biologists released four fishers today in the Nisqually River watershed of Mount Rainier National Park. Overall, the partnership led by the Washington Department of Fish and Wildlife (WDFW), the National Park Service (NPS), and Conservation Northwest has now met their goal of releasing more than 250 fishers in the Cascade Range and Olympic Peninsula, completing the final phase of a reintroduction program that began in 2008. 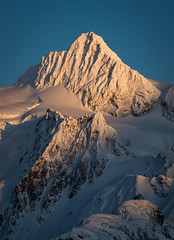 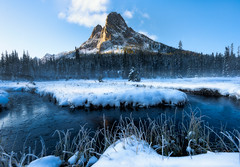 Here's one from early October last year from my first ever trip to North Cascades National Park in Washington. In my mind, this was going to be a warm Fall photo with yellow grasses, red maples, and maybe some larches starting their Autumn thing. Instead, I hit a freak early snowfall that buried everything and blew out a bunch of the hikes I wanted to do.

Anyway, my truck said 18 degrees when I parked here for sunrise. I headed out through the meadow snow and quickly realized I'd have to cross the stream to get the foreground I wanted. It was at this point I learned that my $18 rubber boots from the local farm store were not as waterproof as I had thought. :-)

I spent about 30min wandering around the meadow taking shots and freezing my ass off before the light was gone. It was cool that I was the only one dumb enough to be out there in that freezing weather. The last 10min featured *something* big crashing around in the forest 50yds behind me. Most likely a deer or elk, but in my head it was definitely either a grizzly or a Sasquatch.

This is one of my favorite shots from last year, both for the photo and the experience. I loved the North Cascades.

The ridge west of Mt. Torment 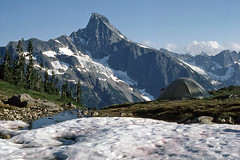 Obstacles on the Descent 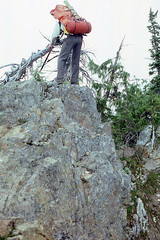 The descent to Beaver Pass involves some steep gullies and cliff bands. 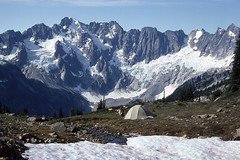 We spent the next day relaxing in the meadows around camp, taking pictures and looking at wildflowers. 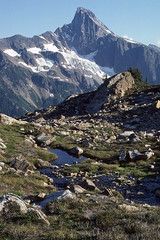 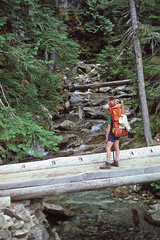 We spent our last night at the Pumpkin Mountain Campground, on Ross Lake just south of Big Beaver Creek. The next day we hiked out along the Ross Lake Trail to Ross Dam and the North Cascades Highway.. 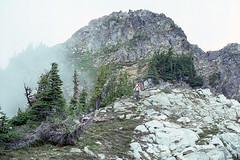 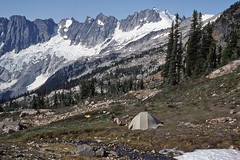 This was the day we began our hike out. Good timing. 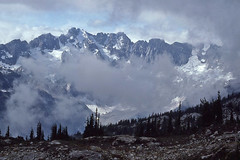 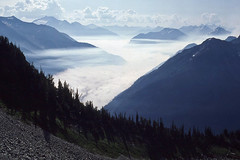 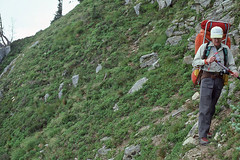 The Wiley Lake High Route is not technically difficult, but it does involve some fairly steep off-trail travel. Here we're beginning our descent to Beaver Pass. 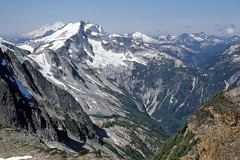 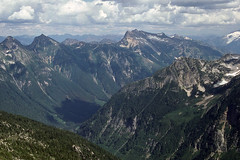 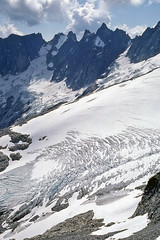 Looking across the lower part of Challenger Glacier toward Crooked Thumb at the head of Luna Cirque.