Hotels Gas Stations Restaurants Camping
Just 75 miles from the bustle of Washington, D.C., Shenandoah National Park is your escape to recreation and re creation. Cascading waterfalls, spectacular vistas, quiet wooded hollows take a hike, a meander along Skyline Drive, or a picnic with the family. 200,000 acres of protected lands are haven to deer, songbirds, the night sky and you. Plan a Shenandoah escape today!

Artists are encouraged to apply for the 2020 Artist-in-Residence Program at Shenandoah National Park.

Local children and teens who like art and wildflowers will have a chance to combine both in Shenandoah National Parkâs annual âYouth Art in the Parkâ wildflower art contest. The contest is held in conjunction with the parkâs annual Wildflower Weekend May 9-10, 2020. 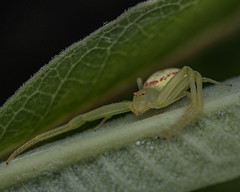 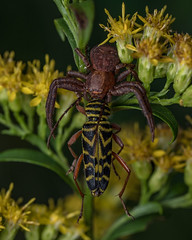 Crab spider (thomisidae,) with locust borer prey. Another exception to my rule -- this crab spider was very large and was the first I'd seen.

"The park is best known for Skyline Drive, a 105-mile (169 km) road that runs the length of the park along the ridge of the mountains. 101 miles (163 km) of the Appalachian Trail are also in the park. In total, there are over 500 miles (800 km) of trails within the park. There is also horseback riding, camping, bicycling, and a number of waterfalls. The Skyline Drive is the first National Park Service road east of the Mississippi River listed as a National Historic Landmark on the National Register of Historic Places. It is also designated as a National Scenic Byway. "

"Shenandoah National Park is an American national park that encompasses part of the Blue Ridge Mountains in the state of Virginia. The park is long and narrow, with the Shenandoah River and its broad valley to the west, and the rolling hills of the Virginia Piedmont to the east. Skyline Drive is the main park road, generally traversing near the ridgeline of the mountains. Almost 40% of the land area—79,579 acres (124.3 sq mi; 322.0 km2)—has been designated as wilderness and is protected as part of the National Wilderness Preservation System. The highest peak is Hawksbill Mountain at 4,051 feet ." wiki 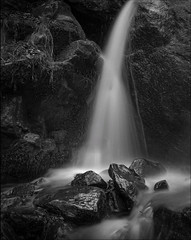 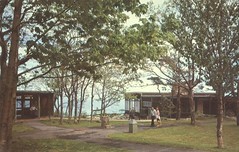 View of Skyland Dining Room and Terrace on Skyline Drive 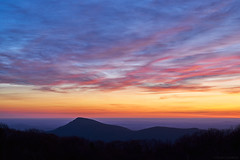 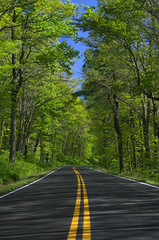 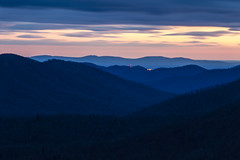 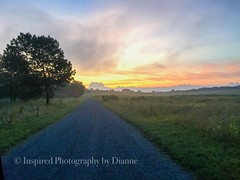 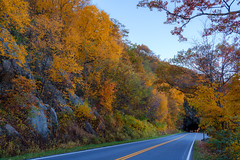