Hotels Gas Stations Restaurants Camping
At Cumberland Gap, the first great gateway to the west, follow the buffalo, the Native American, the longhunter, the pioneer... all traveled this route through the mountains into the wilderness of Kentucky. Modern day explorers and travelers stand in awe at this great gateway and the many miles of trails and scenic features found in the park.

Following guidance from the White House, Centers for Disease Control and Prevention (CDC), and state and local public health authorities, all trailheads at Cumberland Gap National Historical Park (NHP) are now open as the park continues to increase accessibility in phased stages.

Pinnacle Road, Restrooms, and Most Picnic Shelters Open on May 29 at Cumberland Gap National Historical Park as Phased Accessibility Continues

The Pinnacle Road, restrooms, and most picnic shelters at Cumberland Gap National Historical Park will open on Friday, May 29 as phased accessibility continues following guidance from the White House, Centers for Disease Control and Prevention (CDC), and state and local public health authorities. The National Park Service (NPS) continues to work servicewide with federal, state, and local public health authorities in closely monitoring the COVID-19 pandemic and using a phased approach to increase access on a park-by-park basis. 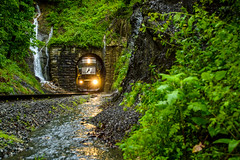 After nearly two months of no traffic, the rails of the CG Line were alive again with a T10! With 20+ loads from Four Rivers Coal in tow, T10 returns to Knoxville via the rain soaked Cumberland Gap. 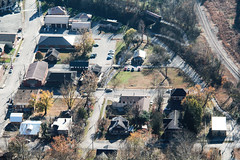 Seen from Pinnacle Point, Kentucky, looking south across a slice of Virginia.

FWIW, we can recommend the coffee shop with the four cars parked out front. 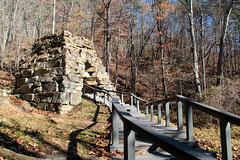 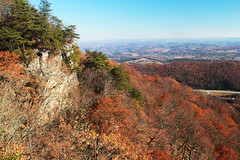 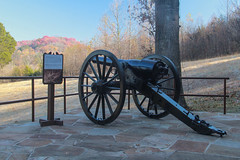 This 20-pound Parrott saw service in the Chattanooga-Chickamauga campaigns. It now defends the Visitor Center against traffic over Cumberland Gap.

Flickr mapping gets it wrong again - the viewpoint is firmly in Virginia, about 100m south of the Kentucky border. We are looking more or less southwards. The settlement of Cumberland Gap, in Tennessee, is to the left; Middlesboro, Kentucky, is off to the right. The Cumberland Gap itself and the Tristate point are marked on the photo. Lens shift used, panorama from two images made in Photoshop (Lightroom could't handle it). 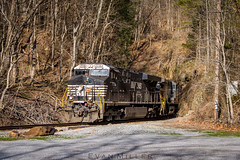 Just outside of Cumberland Gap Tunnel, T10 crosses over from Virginia and into Tennessee. If a train is long enough here, it will be in Kentucky, Virginia, and Tennessee all at once!

Cumberland Gap: Kentucky glitters on the other side 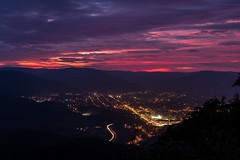 As I looked down from a mountain top in Virginia into Middlesboro, Kentucky, I thought the clouds this evening would completely block the setting sun so that I would not be able to photograph a colorful sunset. But it was after the sun set that the lighting became particularly exciting.

I'm standing on the Pinnacle Overlook at Cumberland Gap National Historical Park. The low point in the black "V" below is the gap between a long mountain wall. This is the place where Daniel Boone found his entrance into Kentucky. A revolutionary war against the British would shortly commence. Civil war battles from the new Republic would later be fought on this very spot because of its vantage point. This pinnacle would trade hands between the Confederacy and Union several times. The city of Middlesboro, Kentucky, which sparkles below, would be incorporated in 1890. And the valley below that Middlesboro sits in? It is actually an ancient meteor crater. 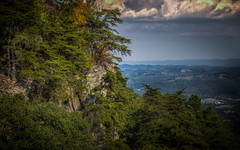 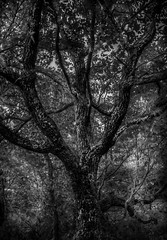 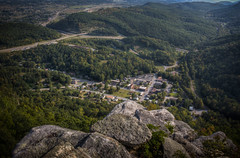 as viewed from the overlook in Cumberland Gap National Historical Park 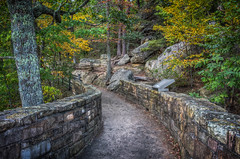 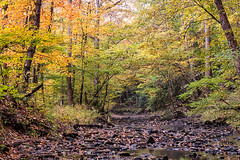 This is an area at the foot of Cumberland Mountain on the Kentucky side near the city of Middlesboro. It is in the Cumberland Gap National Historical Park. 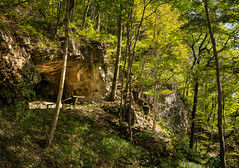 Down By the Fence 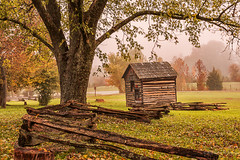 This was taken at the Visitor's Center at Cumberland Gap National Historical Park in Middlesboro, Ky.

Sun on the Cumberlands 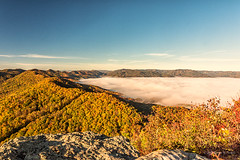 This shot was a bit past the "golden hour" of the morning. I had been taking photos down on lower elevations and decided on a whim to run up to the Pinnacle Overlook in Cumberland Gap National Historical Park.

The city of Middlesboro, Ky. and Fern Lake are down under that blanket of fog. Kentucky is on the right side of the mountain and Tennessee is in the sunshine on the left. I was standing in Virginia. 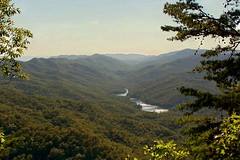 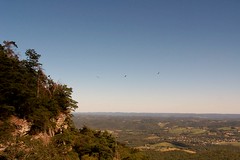 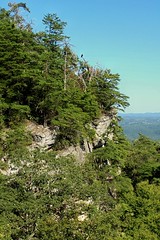