Hotels Gas Stations Restaurants Camping
Joshua Tree National Park is near Twentynine Palms, San Bernardino, California. The park was established on October 31, 1994 covers 1235 square miles and is host to nearly 1.4 million visitors each year. It has been designated as a national monument since 1936. It's made up of portions a the Mojave and Colorado Desert the Mojave being the larger of the two. The park is named after a tree found in the Mojave desert called the Joshua Tree. Hiking, Camping, and Rock Climbing are popular activities as well as stargazing due to the parks lack of light pollution. The park contains wildlife such as lizards, squirrels, birds, sheep, rats, coyotes, rabbits, and snakes. The park is open 365 days a year 24 hours a day but vistors tend to lean towards the fall and spring due to the high temperatures in summer. 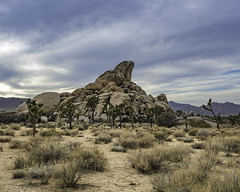 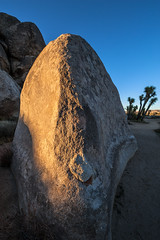 Color landscape photograph of a large boulder next to a rock formation with Joshua Trees in the background at Joshua Tree National Park in the southern California desert. It is just before sunset and half of the large boulder is lit with the warm tones light of the afternoon sun against the shadows. Photograph by Craig Brewer. 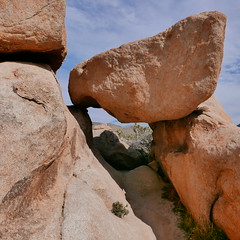 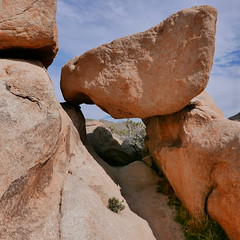 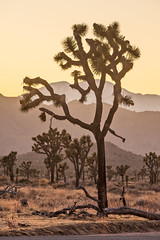 Color landscape photograph at sunset of a field of Joshua Trees and desert plants with mountains in the distance at Joshua Tree National Park in the southern California desert. Photograph by Craig Brewer. 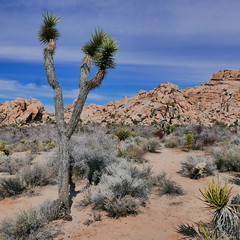