Hotels Gas Stations Restaurants Camping
The Gates of the Arctic National Park is in the far northern most part of Alaska and is also lies farther north than any other national park in the United States. It spans almost 13240 square miles and all of it's borders lie above the arctic circle. It first became a national park in 1980 on December 2. about 11,000 vistors come to the park each year. Caribou are prevalent in the park and have sustained the native people for almost 13,000 years. The park contains serveral large mountains and six major rivers which are the Altana River, John River, Kobuk River, North Kobuk River, Noatak River, and the Tinayguk River.

The National Park Service is releasing a Draft Environmental and Economic Analysis for public review and comment. 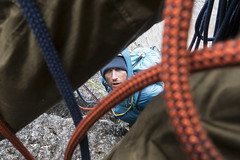 Forest McBrian at a rappel station in the Arrigetch Peaks. Brooks Range, Alaska. Gates of the Arctic National Park.

Sunshine & shadow in the Brooks Range 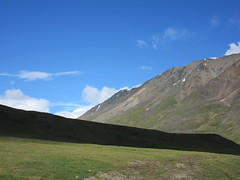 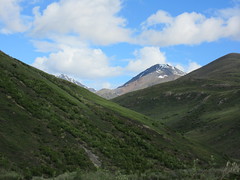 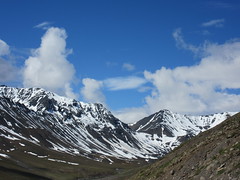 Brooks Range in Gates of the Arctic 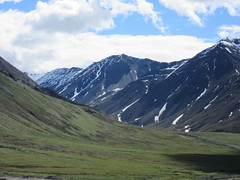 Eastern side of Gates of the Arctic national park, Alaska 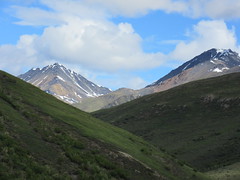 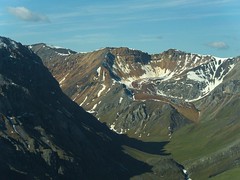 Badille in the Aquarius Valley

Another mountain I was intrigued by was the unclimbed monster north face of Badille...how foolish I was to think I could saunter up to it and climb it! A few hours of pouring over it with binoculars proved no possible lines under 5.12. Regardless, what a glorious peak to get to behold.

People ask if Todd and I ever fought on our 3-week expedition. The answer is no. We were too busy simply trying to help the other one survive through this. We took turns being the one having the meltdown and the one being the rock. It's heartbreaking watching the person you love suffer, that's why you'll usually only find me climbing with an equally foolhardy friend!

My First Topo of the Albatross

My first topo!! I know no one will ever use it to climb it although I still proclaim the route "4 stars -a moderate classic!" But I still had a great time drawing it and that is all that matters! I think this FA is worthy of a second ascent, plus there is an expensive rap route already in place.

on the North Buttress of the Albatross

First View of the Arrigetch Valley

Our first view of the Arrigetch Valley felt like Narnia. The peak you see standing guard is named 'The Albatross' and its untouched North buttress had captivated me the months leading up to the trip. It's the first thing you see in any photo of the Arrigetch, it's incredible, why is it unclimbed???

Hmm are we in Yosemite waiting behind four other parties?!? NO we are in the Arrigetch climbing a beautiful 400' crack never before touched by human hands!!

The Shiv on the Right

The boys settled on this unclimbed peak, attempted in 2002 but unsummitted because the climbing became too difficult.

Looking into the Gates of the Arctic 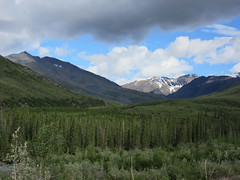 Gates of the Arctic eastern side 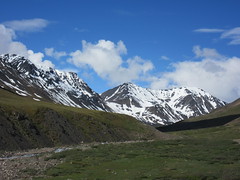